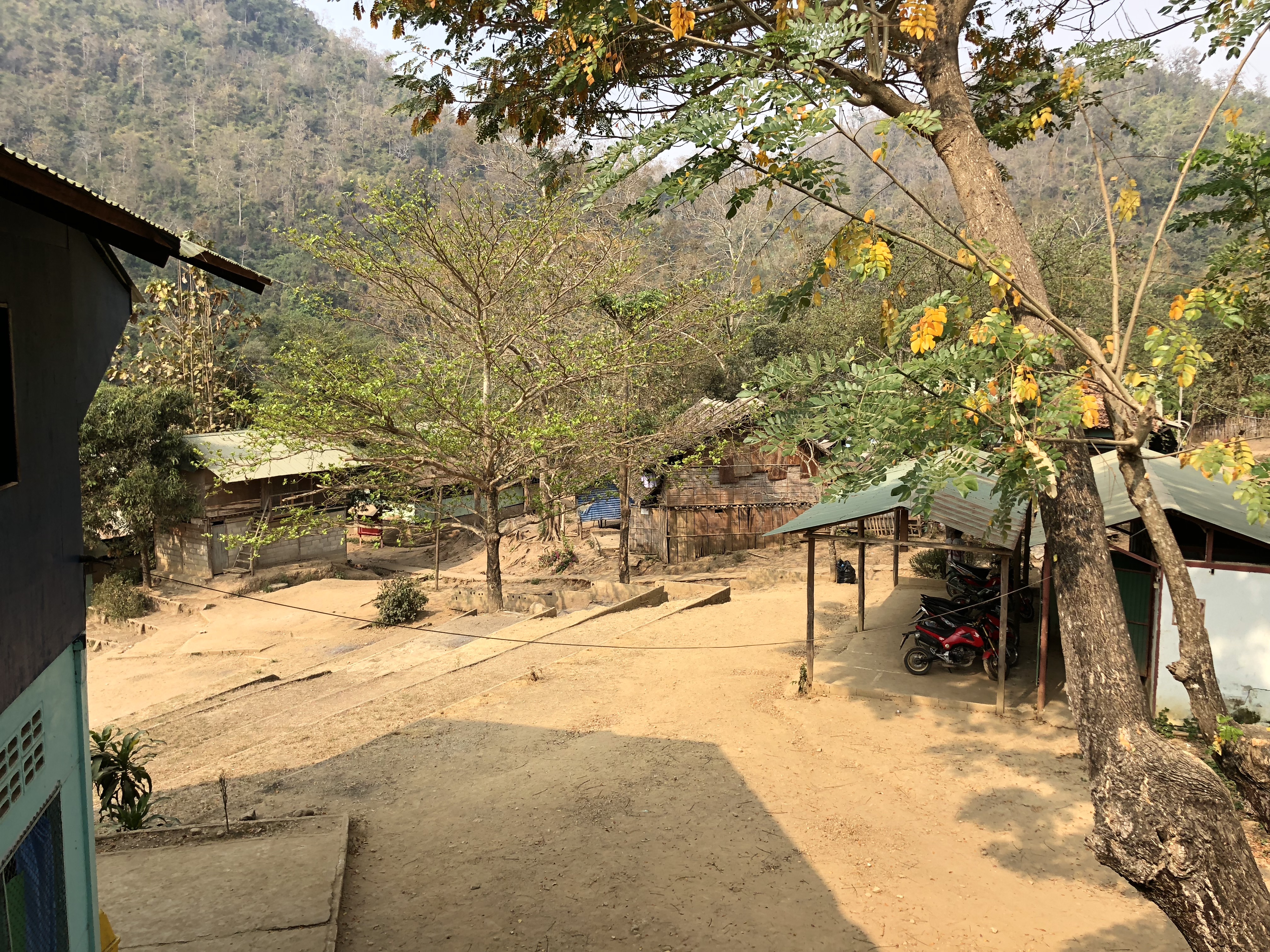 Today was a sobering day.  We traveled an hour north along the Thai/Burma boarder to visit a refugee camp that is home to 50,000 Karen (ethnic minority people from Burma) who have escaped ethnic cleansing by the military government in their home country.  These people have fallen victim to the evil desires of men who find no use for them and their traditions.  In many cases, they have lost everything - their family, their homes, and their land.  They have been forced to flee for safety on the Thailand side of boarder.

Our visit was arranged by our partner Jim Blumenstock for the purpose of experiencing what the girls from Faith House have escaped as well as visiting a full fledged Bible college inside of the camp.  More on that later...

As we approached the camp on the left side of our van, the small shanty home made from bamboo poles and teakwood take over the landscape.  Many of them can only been seen by the small leaf-covered roof.  The camp sits at the base of an imposing mountain amidst lush vegetation.  As we park along the side the road, we were met with armed guards who had already had printed pictures of our passports.  We were welcomed with a smile and a request for a group photograph...not as a souvenir but as evidence in case we don't return as planned.

We were loaded into the back of pickup truck and carried into the camp along the rough cut roads.  As we approached the school building, a wooden bridge carried  people over a small stream.  Curiosity got the best of me (Scott) so I had to ask about it.  Jim clearly said that the bridge took people back into the most densely populated area of the camp.  And he made it clear, we were not welcomed back there.  You see the camp is tightly controlled.  In fact, it was closed to outsiders for more than a month up to the day before we arrived at the gates.  We were some of the first to be allowed.  The government clearly wants to minimize the exposure of the poor conditions in the camp.

As we arrived at the college building, we immediately departed and took part in the morning chapel service where 400 people gathered.  Listening to the Thai people sings praises to the Lord is simply an amazing experience.  Glenn had the privilege of delivering a devotional message and reminded the students of God's faithfulness.  Immediately afterwards, I had the privilege of teaching the college professors practical lessons on leadership development.  Afterwards, we were blessed to share a traditional Karen meal with students from the Master degree program.  Our mission partner is the Dean of Asia Biblical Theological Seminary and they have partnered with the Bible college to offer this next step. It is amazing to see what they are doing in the midst of a humanitarian crisis.

After the meal, we had the humbling experience of touring a small portion of the refugee camp that primarily houses the students.  One could not be help but be struck by the small shanties that housed so many people, many of them without walls.  None of them had plumbing or electricity.  We strolled through the narrow paths quietly taking in the surroundings.  Around one corner, the view opened over a wide swath of land that held many small gardens.  They sat as a beautiful contrast against the tower of a mountain that stood behind dotted with the small shanties on its hillside.  It was there that we paused for a minute to take in the sight and more importantly pray for those that called that camp home.

Three men were present.  All of them blind from explosive attacks. Two of them were completely missing their eyes.  One young man had both arms amputated just below the elbow.  They shared their heartbreaking story with us as we sat quietly and listened.  For 20 years they have lived in this small room with metal beds and boards that served mattresses.  They remain hopeful that someday they will be able to return home.  The only problem is they aren't sure that there is anything to return to.

Before we left to return to Mae Sot, we had the opportunity to sit in one of the ABTS seminary classes (Systematic Theology) to gain a taste of the quality of the education.  Upon exiting the classroom, we filed back into the bed of the pickup truck that would take us out past that bridge that I so desperately want to cross.  And at the end of that rough road, the same armed guard stood ready to take another picture of us that served as evidence that we indeed left the camp.

The one hour ride back to Mae Sot was quiet.  I am certain the conditions of the camp, the plight of the people and those three wounded men weighed heavy on everyone.  Upon returning, we enjoyed a dinner with Jim before he headed back to Chang Mai and we went to visit with the girls at the house.  Our time together with them was sweet as always as we sang praise songs, shared testimonies, and allowed them to apply Burmese make-up (comes from the bark of a tree) on all of us - yes, that included me and Glenn!

It's hard to believe that we are approaching mid-week already.  It is a tiring trip so keep your prayers coming.  More importantly, keep the Karen people in your prayers as they seek God to rescue them from this terrible situation.

How amazing that you were able to go to Mae La refugee camp! But I’m sure is was very heart wrenching also. Impact Prayer ministry has been praying for our brothers and sisters in Christ in the camp for many months. May God bless you to be a blessing!

Thank you for sharing the love of The Father to those in desperate need. Hearing the facts of their lives leaves me overwhelming grateful and sad at the same time. All of you and those left behind to exist there will be in my constant prayers. Be safe and thank you for going and sharing with us the great need for prayer. -Kathy

The account of your travels is remarkable yet disturbing. Thanks to the entire team for your efforts and teaching. In spite of all the challenges, the Karen people's faith and singing of praise to God is a living lesson in faith. We will lift them up in prayer. Please travel and stay safe as you continue to spread the good news of Jesus Christ. We will continue to pray for your safety and return home.

Thank you for sharing a small part of this experience with all of us. I am moved and am reminded of 1 Thessalonians 5:17. I will be praying continually for all of you. Blessings and may God be with all of you while he keeps you safe on your journey.

wow, what a day. hard to imagine. prayers for the karen people, for rescue, and for a safe return for the team.

Thanks for sharing the blog and the photos. My heart just goes out to those dear people. My prayer is that God will multiply your love, efforts, teaching, smiles and words of encouragement many times over for His glory and purposes. Thank you for going and sharing the gospel message - what a privilege. We will be praying for good health and safe travels for the team.

Thank you for sharing. Praying for all of you on the trip that God provides you with the energy and health throughout your journey. Also praying for the Karen people to keep their faith in the Lord. From what you wrote, it appears they know and trust him. One day, they will experience the ultimate joy with Him in His home. God Bless and keep you all for the awesome work you are doing in His name.

Thank you for the pictures and explanation of your trip. We can see and feel a little of your experience, knowing being there is much more than that. I pray for God’s strength and good health to you all, and that His joy and love radiate through you.

Love seeing the photos and hearing about your experience so far. Hoping and praying that you continue being encouragers to the brothers and sisters you meet and serve. Keep sharing God's grace, mercy + peace!

Thanks for giving us a glimpse of what you are experiencing. It provides a sobering reminder of the plight of many and how much we have to be thankful for. You all are in our prayers as you share Jesus' love.

Thank you for sharing these difficult updates. It’s difficult to fathom 50,000 souls trapped and living in these conditions. Praise the Lord for the timing of your visit and being allowed into the camp which would have been impossible a few days earlier. I pray for the deliverance of these people, daily provision, and sustained hope. In Christ.


Thank you for a glimpse into the daily lives of these dear people. The photos were beautiful yet heart wrentching!
Praying for your safety and thanking God for His encouragement to the Karen people.

You are all in my heart. I'm praying the connections that began on last year's trip continue to grow and their trust in humanity can be nurtured by your love for them. You are definitely the hands and feet of God for these young ladies.

Gerry Ball
Praying for all of you. Thank you for the pictures. Oh my goodness. I will pray for your strength and willingness to help those women.