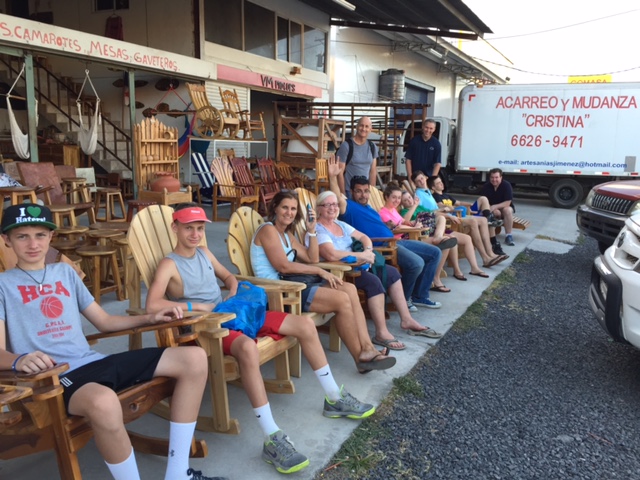 Saturday morning was one of the hardest mornings of the week, we had to say goodbye to all the kids that we stayed with at the camp. We said goodbye with lots of hugs and tears. All of the buses came between 9 and 10 and the campers piled in sometimes three to a seat with some in the aisles. It was hard saying goodbye to some kids because we had grown such good relationships with them in just one week, but we knew that they were returning home after having heard the gospel and some of them receiving Christ.

Even though we were sad that all the kids left, we had something cool to cheer us up. We headed straight to the beach after all the kids went home. The place we went to had black sand! The only bad thing about the sand is that it burned really bad, and we had to hurry up and run off of it. At the beach we had a little cabana that had two hammocks and a table. We packed PB&Js and brought chips. We had a wonderful afternoon relaxing and enjoying our team and God’s beautiful creation.

After the ocean we went back to the camp to shower up and get ready to get some souvenirs. When we got there we were welcomed by an army of wooden chairs! There were about a hundred of them! There were lots of different things too like some beds, little toy animals, hats and shirts. Mostly everyone got something to bring home with them.

After the souvenir shopping we went to Panama City to spend the night in a hostel called Surfer’s Paraiso.The nice thing about it was that we finally had air conditioning and hot showers! Yin-Di got us Chinese food and we enjoyed our meal together.

God had given us another good day!