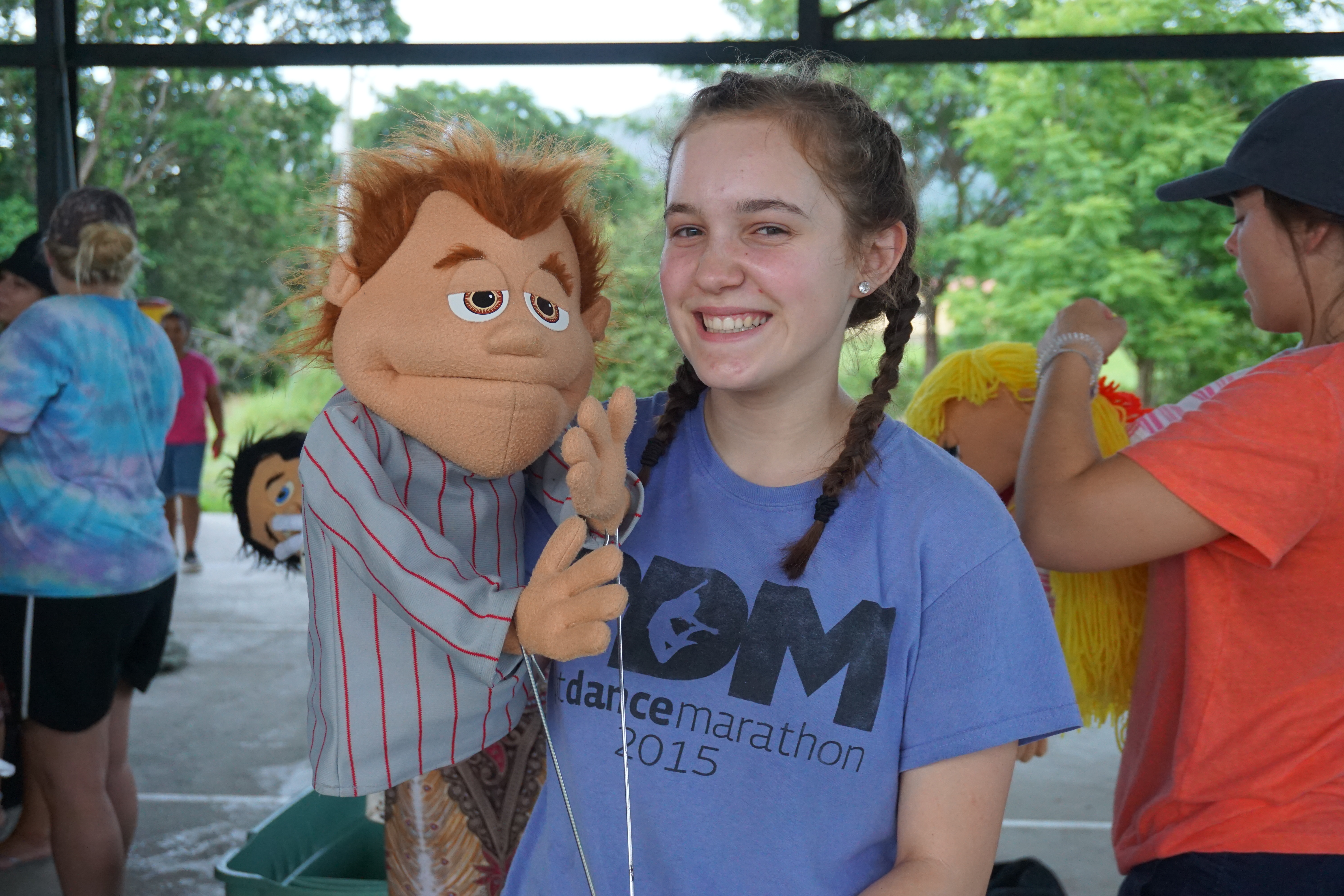 Today, I had the opportunity to perform a drama to share the gospel in a youth detention facility. I was very scared at first; I was pulled aside and patted down by the security and I got very nervous. When everyone got through security, we began changing, assembling the sets, and doing makeup. This was becoming so real all of a sudden. We got the five-minute warning, and then it was time. As my part to enter the stage was approaching, I got a wave of nerves and prayed that I wouldn’t mess up. I went out, did my part and it went well! When the scene finished, I ran back stage and started changing and doing makeup all over preparing for my next part.

Although I was very hesitant about the whole performance and being in a jail, after I was done performing, I was able to talk to a few kids and later learned that every single one of the boys there accepted Christ into their life. At this point, the drama became very real. God used us to change 20 lives forever simply by doing a few dance moves. After the jail, we headed to the orphanage, which is actually connected to the jail. There, I was able to talk to kids and meet a boy named Rafael who was one year old. It was crazy to me that a person would leave their baby before they can even speak. My sister was able to talk to a girl about the same age as us who was dropped off at the orphanage just a few days ago. She was left by her mother at birth and lived with family all her life until she met her sister who lived with her mother. So, she left and lived with her mother and claimed it to be the worst month of her life. She said she was better off at the orphanage. Today was not easy to say the least, my eyes were opened to so many new things and for that I am so thankful.
- Gabby Tom, Sophomore

Today was the first day that we finally got to interact with Panamanian children and it finally has hit me that I’m serving in Panama. I am a part of the dance team and we got to perform our routine for the first time; it was truly exhilarating. The kids were so excited that we were there, and they absolutely loved the dance and puppet routines. After we performed, we were able to interact with the kids and I learned that I know how to speak more Spanish than I thought. No matter how tough the language barrier may be, that doesn’t change how much these kids want to talk and learn about us. Before the kids left to go back to class, there was a huge crowd of kids waiting for us to sign their notebooks and give our autographs. But the most exciting part about being in the schools was seeing how excited these kids were to accept Jesus into their hearts, and many did! After that, we went to an orphanage called Metro Amigo. I had never been to an orphanage before, so I was incredibly nervous, but my heart was touched. I met this little girl named Victoria and she really changed the way I see things. She had dirty clothes on with lots of visible scrapes and scars all over her body, but she was so lively and excited to play with all of us. Her hardships weren’t going to stop her from having fun and living life like a normal kid. Victoria showed me that if she can live on being happy with what she has, then so can I. She probably impacted me more than I impacted her and that was something that I wasn’t expecting.
- Sophie Bottone, Junior

When I originally signed up for this trip, I had no idea why God was putting it on my heart to travel to a foreign country. I couldn’t speak the language, and I knew nothing about their culture. As I talked to other people, they told me that Panama would change me just as much as I would affect the children, teenagers, and adults that live here. There were times that I questioned this because I didn’t understand how my small contribution could make an impact in any of the Panamanians lives; however, today, I finally understood what the people meant when they gave me those wise words.

I had the privilege of visiting a youth detention facility earlier this afternoon. While getting patted down, I couldn’t help but be a tad nervous. As we put on our costumes, one of my favorite Bible verses came to mind –  Isaiah 41:10 “…fear not, for I am with you; be not dismayed, for I am your God; I will strengthen you, I will help you, I will uphold you with my righteous right hand.” Immediately, the fear that had overcome me at the gate melted away. After the drama performance, I could feel the pride and joy that overwhelmed me as I peeked from behind the curtains to see every inmate out of their chair, praying and asking for Jesus to come in to their hearts. It was so amazing to see our performance be the seed in their growing relationship with God. By the time we were getting ready to leave, I was confident and enjoyed talking with the boys (with the help of a translator) about our differing lives; although, the happiness didn’t stop there; instead, it overflowed into my next destination.

Just a short walk away was the orphanage. As I observed my surroundings, I couldn’t help but take in the number of smiles that were around me. Between us and the children, there was not a frown to be seen on the playground. After a few minutes, I found a boy playing around with a soccer ball. I’ve been playing soccer for almost thirteen years, and I’ve never seen any player that was as talented as him. I was amazed that he could perform tricks that I learned on YouTube and from various coaches and to think that he was self-taught blew my mind. I used what little Spanish that I had learned this week to ask him if he wanted to pass. After a few minutes of us passing, a huge match broke out. This little kid that was half our size and was probably only 10 years old was destroying us on the futbol field. He was breaking everyone’s ankles including Jeremy’s! It was so funny and cool to see this little child going through five people each time to score a goal. At the end of the match, I thanked him and his friends for playing with us. For the first time, I felt a change in myself. These children had almost nothing, but they were grateful for everything they were given. Many of them played soccer without shoes on, but they never once complained. I tried it for five minutes and cried out in pain at least ten times, when I stepped on a rock. It was a very valuable and humbling lesson, and I can’t wait to carry it with me in to the future.
- Allison Paxton, college freshman

Today was a fantastic day. I could leave off on just that, but that would be too short for my liking. I am part of the dance crew, so we perform a dance routine for the boys and girls of the Panamanian schools. I am also the lead dancer which is very ironic because I am the least coordinated. So, when I found this out I was very nervous.

Today we performed for the first time in front of an actual audience, and I had so much fun! After we perform our dance, a puppet show goes on and then they are given the gospel message. They react so positively and amazingly. These kids were all so awesome. They came up to us after the message and wanted all of our autographs which was really cute and a couple of them just ran up and punched me, but after I explained high fives, they chose that instead. These children though, were so willing to learn that they learned how to ask our name, so that no matter what, they would at least know our name.

After this, we went to an orphanage. This orphanage was honestly really sad. There is a jail right next to it that is for the kids after they turn 18 and go back to the streets. They predict that most of these kids will end up in the jail within 6 months of turning 18. That is a sad thought. I mean, with all odds betting against me, I would feel terrible. But, Cody did a painting for them today and surprised them with the face of Jesus in his speedy, artistic way, and they loved that! I saw in that moment that most of them may be in an orphanage or locked up in jail, but they still know about Jesus, which means they have at least a chance at accepting Christ. My prayer is that if these children have not accepted Christ, that they will due to us planting this seed. As Jeremy says, there is always a seed. Some people will plant it, some will water it, and some will harvest it. I would love nothing more than to harvest a seed and bring someone to Christ, but if I only plant a seed, then that is good enough for me because that is God saying that is my part.  All in all, Panama is amazing. I can tell it will be difficult to leave. I am already making new friends with locals and people on our team. I am so thankful to God for presenting this opportunity to change lives; even if it is only one, it is worth all the effort. This experience will stick with me for many years and I can’t wait to share more stories. This is Shawn Myers signing off. Goodnight Pittsburgh and goodnight Panama.
- Shawn Myers, Junior

Praise the Lord for each life and heart changed by the Good News of Jesus! Praying for continued safety and unity amongst your team.