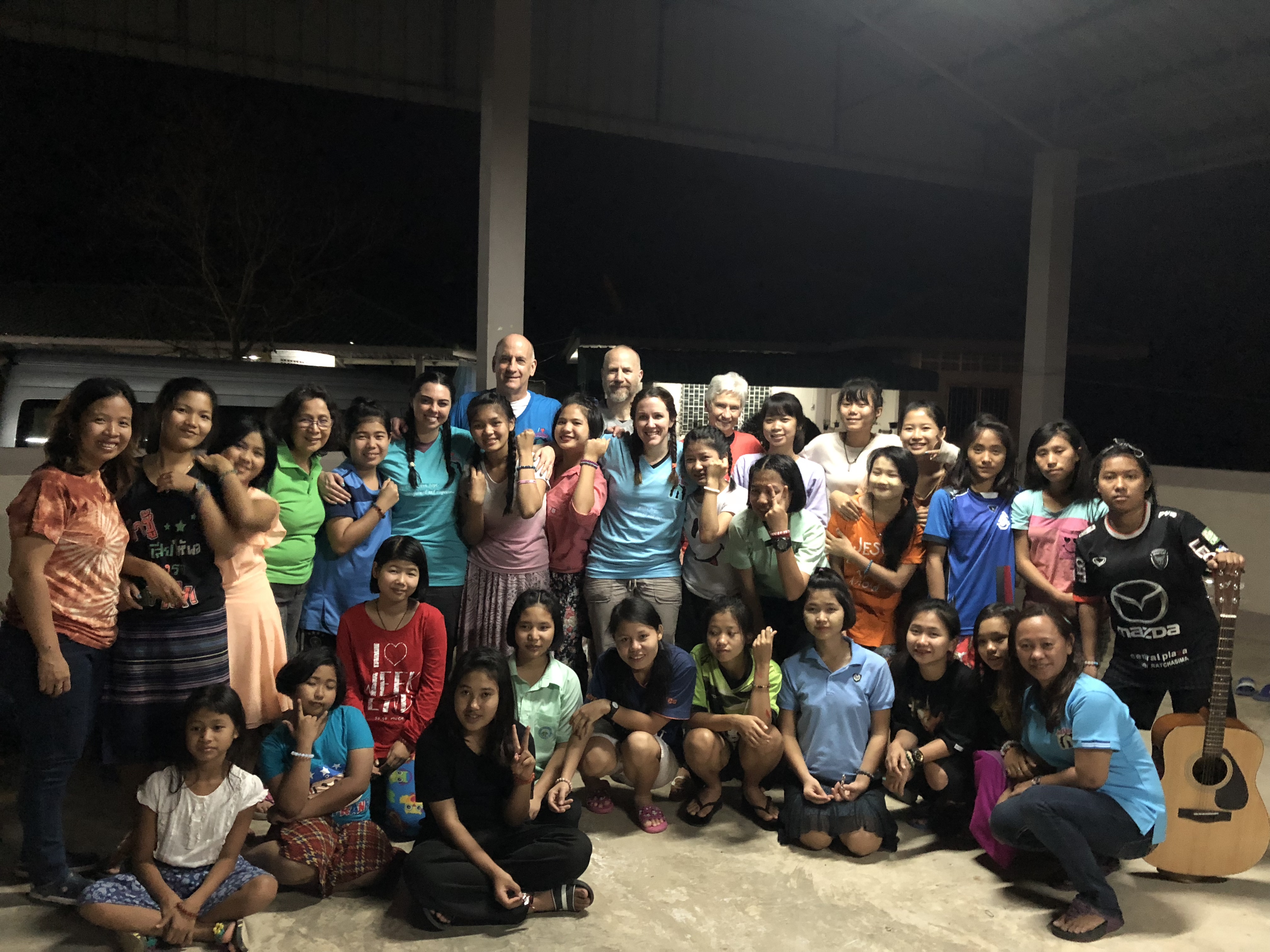 It was a beautiful new day and we were still singing when the evening came! We started early this morning at Maepawit High School.We had the privilege to teach English to the students in grades 7-12.  We started out with a scavenger hunt that Jaclyn and I had prepared in advance. They were in groups and had to find, collect, and do the things listed on the paper. For example, find a flower, find 3 brown leaves, take a picture with Glenn, hug Vonnie, do 10 jumping jacks with Jaclyn and ask Scott what happened to his hair! We wrote everything in English and the rule of the day was to speak in English only! We came with lots of candy and chocolate to give out and if they spoke in Thai or Burmese they had to give back a piece of candy! After the hunt, we played telephone. I will explain the game because if you are like Glenn and you are thinking you only know how to answer a telephone, well this is for you! Each team leader said a phrase to a student and the phrase had to be told to the next person, they whispered it to the person next to them. Students continued listening to the phase and repeated what they think they heard to the person next to them. This was done until the last person in the line heard the phrase. Once the last person heard the phrase, they said what they think they heard out-loud. This is compared to the original phrase that the game started with. This is the moment when all the players get to learn just how much the phrase changed or stayed the same through their “telephone line”. It was a hit! Lots of English was spoken and lots of laughter was heard! Jaclyn then had a great idea of playing jeopardy and it was also a lot of fun. The board had six different categories and words were written in both Thai and English. Depending on how it was written the students had to read and speak in both languages. The last activity we had for them was writing and reading questions and answers about themselves . They had to read and answer questions like “What is your name?” “My name is___________.”  Our team felt very blessed to spend the day with these students in their school!

We then spent our last evening at The Faith House. The girls prepared a delicious meal for us. They had fresh mangos and papaya from the garden. They made dim sum, spring rolls, molo soup, chicken, rice, and Burmese salad! After dinner, we played games and Scott started kicking a soccer ball around which turned into a hacky sack game with a soccer ball. So when you die you go in the middle of the circle and you come back alive when you get hit with the soccer ball. Also known as “crazy dog” as the girls called it. Glenn played so well his words were “Grandpa is broken!” The night ended as we worshipped with them one last time before we had a surprise for them. Through prayer and financial support from each one of you, we were able to pass these gifts onto the girls:  3 laptop computers, 7 mattresses, 12 pillows and pillowcases and bracelets! Thank you for helping make that possible! They were overjoyed and appreciative!

It is evident that God’s presence is here at the Faith House. It shows not only in the girls’ hearts, but in their smiles and their faces when they worship. Every girl is given hope, transformed and empowered at the Faith House! What a blessing to serve here this week! Please continue praying for the staff and the girls at Faith House as well as for our travels back home!

So much fun thank you for sharing. God Bless these girls look at them with their new blankets and pillows love all the smiles. Dear Lord please keep everyone at Faith House safe and thank you for their lives. Bring our brothers and sisters home safe. In Jesus blessed name.