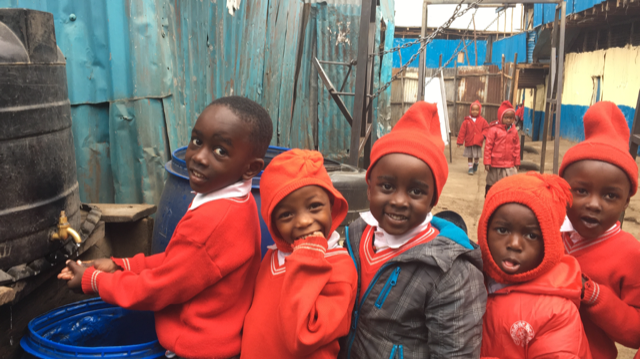 Today was a whirlwind; many of us were so engrossed in our tasks that we hardly saw one another until the end of the day.

Ron, Ben, and Cami spent an hour speaking with the high school teachers about their needs and challenges.  Boniface, a science teacher, described the difficulty of helping students visualize experiments without a science lab.  While most American high schools have excellent lab spaces equipped with every chemical and compound imaginable, AIC Zion mixes dirty water with clean water to simulate chemical reactions.  Philip, a Swahili and geography teacher, described teaching about the Earth without any accurate models.  He is forced to sketch a rough drawing of the continents on the worn-out blackboards or use a soccer ball to simulate a globe.  The teachers also described the physical trauma that students face far too often.  Because of a complete lack of home security and police presence in Mathare, groups of men easily enter the homes of female students while the parents are away.

At the same time as the meeting with the high school staff, Bill was visiting a store to purchase equipment to enhance the school's WiFi connection.  When he returned to Zion, he was also clutching several maps and charts that he had bought for the school on a whim--fulfilling Philip's needs even while he was describing them!  This event reminded us of God's presence with our team and at Zion.

Laura Wylie and Matthew spent time with the primary school teachers to discuss leadership in the classroom.  They proposed methods to assist slower learners, including the designation of a teacher to oversee special needs.  Originally, Reverend Wambua had only mentioned plans for one teacher seminar; however, they have been so effective that several discussions have occurred over the course of the week.

Thanks to members of The Bible Chapel, we were able to bring supplies to benefit Zion's medical clinic and school library.  Laura Cabe and Matthew took a tour of the clinic and marveled at the range of vaccines that are offered at affordable costs.  Additionally, the clinic is equipped to deliver babies and immediately identify HIV positivity--a valuable resource for Mathare's residents.  The library books from our team included the complete Chronicles of Narnia, grade school readers, and biographies of American presidents.  Though the clinic and library still have many needs, we pray that the medicine and books will go far in benefiting Zion's students in body and mind.

Wayne and Dee gave a discipleship seminar to local pastors with the assistance of some former seminary students, who came to visit for the afternoon.  Drawing upon their decades of teaching theology in Kenya, they effectively taught the importance of leading others toward maturity in Christ.  Dee has also earned the affectionate nickname "Shosh" (derived from "Shosho," the Swahili word for grandma) from nearly everyone at Zion.

Meanwhile, Laura Cabe did what none of us were willing to do: organizing our team's "command center," a small room in the main church building.  The detriment of having a team with diverse talent is the mess that the talent accumulates.  Ron's lesson plans, Bill's laptops, Wayne's sermon notes, Cami's math flash cards, and Laura Wylie's craft supplies, among other items, crowded our limited work space until this afternoon.

Ben and Bill spent their afternoon leading a seminar for the church's small businesspeople, who mostly sell goods such as food items and trinkets in Mathare.  After Ben gave a presentation about marketing, customer relations, and separating oneself from the competition in any way possible, a question and answer session revealed the persistence and resilience of Mathare's entrepreneurs.  Bill and Ben resisted the urge to delve into discussing economic models of competition for long enough to encourage the businesspeople to "think outside the box" and to work as if working for God.

Cami and Ron have devoted every waking moment to challenging their students.  The classes quickly rose to the task of noticing the patterns behind Cami's magic tricks and solving her extremely difficult flash cards.  Ron once again disappeared into the high school.  Occasionally, a team member would have a "Ron sighting"--which is on the same endangered species list as Kenyan schedules--as Ron shuffled from classroom to classroom.

AIC Zion's teachers, students, and congregants take resources--knowledge, school supplies, medicine, books, or friends from America--and stretch them far beyond what seems to be feasible.  Though Zion has no shortage of needs, today we learned that God is listening to the prayers and difficulties of the children and staff.  With God, there is hope for Zion's future, and we have been blessed to have a small role in making that future a reality.

Praying daily as I'm sure, are a lot of others, and it sure looks like it has been working . " Praise the Lord " Thank you much for the daily blog !!