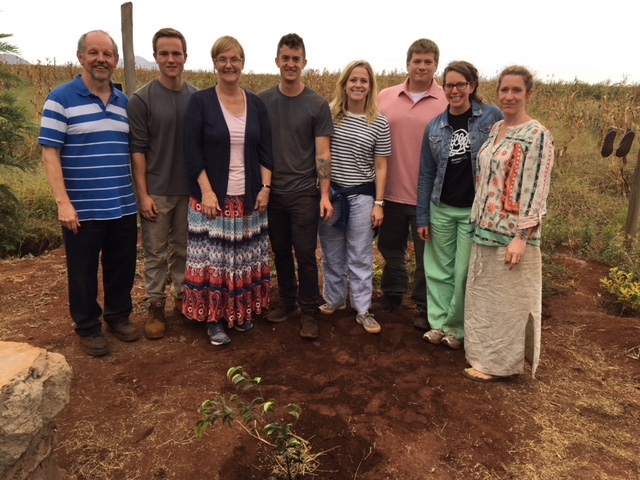 Reverend Wambua is a "starter" who is blessed with the ability to launch long-lasting ministries.  Therefore, AIC Zion is not his only project.  Today we had the opportunity to bring a group of thirty Zion students to visit the recently established Lion of Judah School, located in the Kenyan countryside sixty miles south of Nairobi.

Although the distance was relatively short, the duration of the drive was rather long.  In order to avoid the notorious Nairobi traffic, our team departed the hotel at 5:30am.  We napped for the entirety of our three-hour journey as the van passed through an endless expanse of golden-brown savanna.

During last year's trip, Matthew and Ben were able to witness Lion of Judah in its initial phases of construction.  At the time, the property contained an outhouse, one classroom, sapling trees, and a few rows of planted vegetables in a field of red, dusty soil.  Lion of Judah now educates forty-one primary school students with several large classrooms, a field, a playground, and additional multipurpose buildings.  Thanks to the fertile volcanic soil and a season of plentiful rain, the saplings planted last year are now over four feet tall.  Reverend Wambua took us on a tour of the property as he outlined his plan to make the school entirely self-sustaining within the next five years.  He showcased the school's fields, which are teeming with pumpkins, corn, peas, and other crops grown for the students' meals.  He explained the solar technology used to provide power and the plans to install a borehole that will draw water from an aquifer, even during the dry season.  Throughout the tour, we marveled at the extremely rapid growth of the school and its facilities.

The day's schedule officially began with a ceremony directed by Reverend Wambua and Lion of Judah's staff. AIC Zion's students flawlessly showcased their Kenya Scouts presentation and recited a handful of poems.  Then, Lion of Judah's students stood proudly in front of our team, chanted seven or eight Bible verses from memory, and presented more poetry.  Two four-year-old "baby class" students stole the show when they led their classmates in counting to ten and reciting the alphabet.  Although one of the two students needed some assistance from a friend to recall the letter between "D" and "F," the self-confidence, achievement, and happiness of the students were evident.

Before we departed, Ron, Cami, Laura Wylie, Matthew, Dee, and Bill were allotted half an hour to briefly meet with Lion of Judah's teachers.  They divided their time very efficiently: ten minutes were devoted to a teaching seminar, ten minutes to a Gospel presentation, and ten minutes to demonstrate the two laptops that our team brought for the school.  Laura Cabe, Ben, and Zion's teachers entertained all seventy children while the meeting occurred.  They played various games on the school's grounds and counted the cattle herded through the farmland outside of the school.

After the seminar, Ron observed that Lion of Judah's needs were of a different type than those of AIC Zion.  While Zion sometimes struggles to deal with emotional and socioeconomic problems caused by Mathare, Lion of Judah survives without basic amenities like clean water, consistent electricity, and the Internet.  However, Wambua's ambitious vision casting indicates that these needs will be fulfilled in the near future.

Our time at Lion of Judah concluded with a tree-planting ceremony; each of us had a sapling dedicated in our honor to remember our day at the school.  We feel blessed to be a small part of the school's infancy and to experience a different portion of Kenya.  None of us will forget Lion of Judah's students, whose eyes glimmer with intelligence and love for life.

We climbed into the van coated from head to toe in deep red dust.  As we bypassed heavy Nairobi traffic by offroading on the side of the highway, we shouted with excitement every time we spotted a wild giraffe.  Even after a day filled with scenic landscapes rich with color and framed by enormous mountains, God gave us one final blessing today in the form of a miniature safari.

In scripture, God demonstrates His majesty by creating something from nothing.  Out of a dusty plot of land, God has raised a school that supplies food, education, and Christian education for a wonderful group of children.  Today, we truly witnessed beauty in its purest form.

Whatever you started and doing it whole heartedly is not in vain.
The Mighty living father who reigns forever shall see you through all your missions even in your private life.
God Bless The Bible Chapel.
The Bible teaches us never to grow weary of doing good.