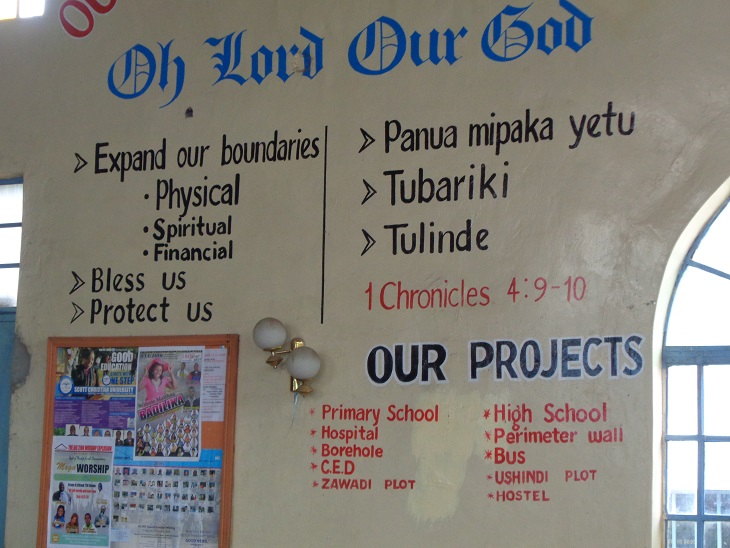 Our team was mostly split up today as we completed various projects at AIC Zion.  We immensely enjoy spending time with the students and striving to improve the school, church, and facilities that will ultimately allow them to succeed.

Eric devoted his day to working with local engineers on the security camera project, which will keep Zion's facilities and students safe.  He also began building a "robot" with Professor and a handful of his friends.  So far it consists of a battery, a cardboard box, and an old motor that can successfully spin axes for wheels.  The next assignment for Professor and his following of future engineers is to find suitable wheels in the slum to allow the box to drive.  Eric is also encouraging the students to teach their classmates about technology, and we hope that one day we return to a Zion with dozens of robots whirring around the school grounds and classrooms.

Matthew was able to visit Zion's young adult mission team, which is composed of ten members.  The mission team is planning to visit a local church in July to preach and to assist with their ministries.  Additionally, Matthew spent time learning dances, listening to music, and attempting gymnastic stunts with a group of high school students.

Ben used as much of his day as possible to teach in Zion's classrooms.  He taught agriculture, algebra, and business math to Class 7 (7th grade), then got to know the students in Form 2 (10th grade) during their lunch break.  The Form 2 students asked several questions about what is required to attend university in the United States, and Ben is beginning to hope that one of Zion's students eventually ends up studying with him as he enters university next year.

Alan was encouraged by his visit to AIC Zion's Ushindi branch campus with John, during which he was able to pray for the campus with its lead pastor, John Katete.  Ushindi has undergone difficult times since looters recently stole the sheet metal that composes the church building.  Alan also donated trumpets from various sources in the United States to Zion, helping to fulfill a goal of Zion to improve its school band.

John took a complete tour of Zion's boundaries and discussed Zion's vision with Reverend Wambua.  The mission that God gave Wambua for the church and school's facilities is being confirmed through the successful acquisition of additional property.  Thankfully, a cult that is next door to the property will soon be completely surrounded by Zion's land, meaning that the cult's days at its current location are numbered.  Also, John's experience at Ushindi was encouraging to him because fifteen of Ushindi's students placed their trust in Jesus for the first time as a result of the visit.

The team concluded its day by joining together with Bonface, the worship leader for Zion's church services tomorrow.  They enjoyed practicing the Kenyan styles of praise (fast-paced songs) and worship (slow-paced hymns) in both English and Swahili.  At one point, Bonface exclaimed that he felt the Spirit moving, and from that point on he led our mission team and the Kenyan worship group in an amazing period of singing, dancing, and fellowship.  Afterwards, the team watched one of Zion's choirs practicing for church tomorrow and attempted to mimic their dance moves.  According to the choir leader, we "need some work."

We are continually impressed that AIC Zion is growing and expanding its reach beyond its walls, just as the Bible Chapel seeks to do according to the Great Commission.  Pray that God grants them courage and resources to do His work.

Tomorrow, we will be delivering messages to the teens, young adults, men's group, and main services at church.  Please pray that we are able to cross cultural boundaries and deliver relevant, challenging, Biblically sound messages of encouragement to the congregants.