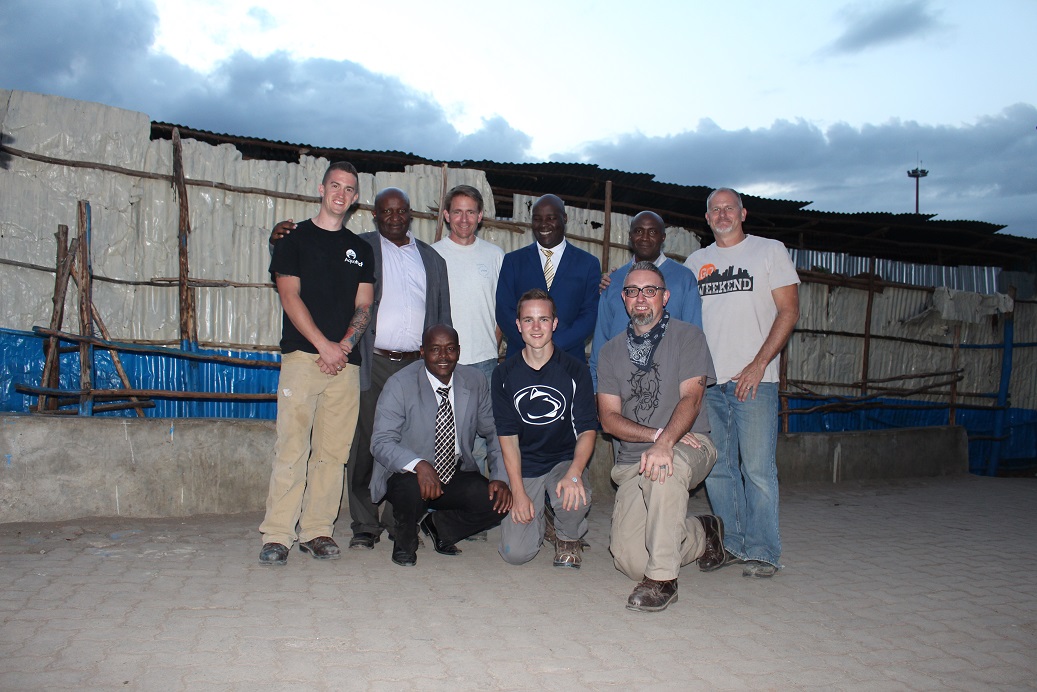 As our trip comes to a close, we are preparing for what will surely be a very difficult goodbye tomorrow.  We devoted our last work day in Mathare to finishing our projects from the week and preparing to tell our stories to our brothers and sisters back home.

This morning, we almost finished painting the sheet metal wall that separates classrooms and a small courtyard from the slum.  Francis, an artist who attends Zion, will add the finishing touches once we leave.  We hope that the bright blue and beige wall will help the students and staff forget the damage and discouragement caused by fires that affected that area of the school last year.  As we painted, the "baby class" (preschool) students crowded around us.  Alan and Ben led them in a conga line, then received countless slobbery high-fives as a reward.

Eric and a handful of Kenyan electrical engineers nearly completed the security camera project.  The cameras are mounted, wired, and positioned; they only have to be connected to the central control system.  Today we learned that Zion suffered a break-in last month, during which armed robbers stole the school's few laptops and the church's amplifier.  The security cameras will serve as a deterrent to future criminal activity and assist in police investigations if another security breach were to occur.

John learned more about the students' daily lives by serving lunch, consisting of rice and lentils, to the secondary students.  He also orchestrated school pictures for Class 8, Form 1, and Form 2 so that those who have supported the Bible Chapel's partnership with AIC Zion can see how the school's original students have grown into intelligent, ambitious young men and women.  John and Alan also filmed an interview with a student who shared her aspirations for the future and led us to her home in the slum.  The video will be shared as soon as possible.

Matthew was able to find time to play games with the students at recess.  He also coached the secondary school's volleyball team, which recently advanced to semifinals in a competition in Nairobi.  Although the students have only been playing volleyball for a few months and practiced without a net, they were able to beat some of the best teams in the region.  We are endlessly impressed with the many talents of Zion's students.

Ben and Eric taught science in Classes 6 and 7 during the afternoon.  After the lessons, they concluded with a drawing contest and a dance party put on by the members of the drama team from Class 6.  They will miss witnessing the students' attention, devotion to academics, respect, and manifest kindness.

Before concluding our day, we met with Reverend Wambua and the members of Zion's school board.  From the meeting, we learned more about the history of the school and how far the institution has come in the past eight years.  When the school first began, the students were hungry, sick, and discouraged.  After receiving two hot meals per day, school uniforms, and treatment for common ailments such as ringworms, classroom attention and performance began to increase.  With positive encouragement from the staff and the teaching of God's word, Zion is now a school which shatters the average scores for Kenya's national exams each consecutive year.  We prayed for the continued success of the school, reported our observations of the students' excellence to the school board, and were invited to return to Zion next year.  God willing, we will gladly be taking them up on that offer.

To celebrate our last night at the hotel, we had a "proper Thanksgiving feast," complete with ordering too much food and recalling what we were thankful for during the trip.  We enjoyed fellowship with one another and agreed that the trip was a success.  In addition to encouraging the teachers and students at Zion, the weather has been pleasant and comfortable during our entire time in the Kenyan winter, we were able to witness the beautiful countryside, and we reinforced new and old relationships with friends and students.

Please pray that we are safe as we leave Kenya tomorrow night and that our goodbye tomorrow is not too tear-filled.  Expect one more blog post covering our goodbye and recapping our trip, although it may not be published tomorrow.

Great post Ben! Thinking how God used your lemonade stand to catapult Zion school to bring glory to His Name! The fact that you and your Dad had the excitement of going "together" on this trip is a memory neither of you will forget. Praying for a smooth transition and safety on your way home. God bless each one of you.

I echo Mary Ann's comments. Ben, we will be interested to hear your personal response to seeing the outcome of the lemonade money. Your desire to "do something in Kenya" with the money led to the outcome you have been able to personally see, feel, participate, interact, etc. Consider the many lives that have been touched, all originating from some lemonade stand sales. Thank you for your passion then, and now. Praying for safety in travels back home tomorrow.

I could not be more proud of this team. You guys are awesome!