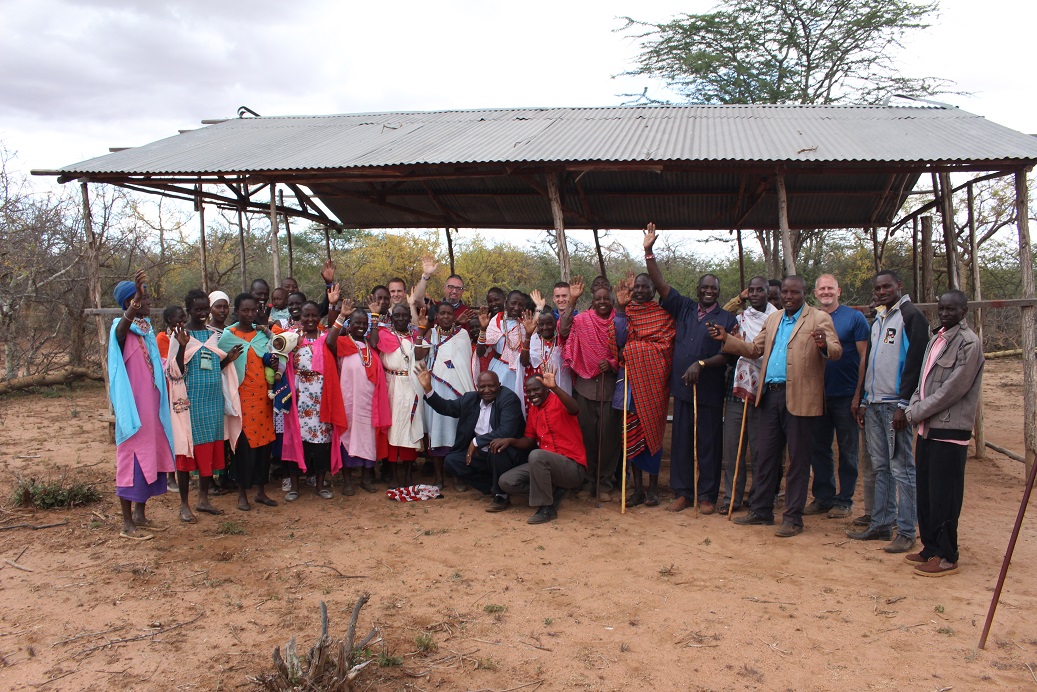 Today was spent ministering to a Maasai village located a few hours south of Nairobi.  The Maasai were very welcoming to our team as they invited us into their mud-walled homes, showed us their thousands of cattle and goats, and described their way of life without electricity and completely surrounded by open savannah.  We entered their church, which was a cleared area in the middle of a field with no structure except for a simple roof made from sheet metal.  As we sat in the church surrounded by wilderness and the vast savannah, Matthew leaned to Alan and said, "What's the WiFi password?"

The Maasai hosted a special church service for us, and we listened to them tell us about their efforts to plant other African Inland Churches (the same denomination as AIC Zion) in neighboring villages.  We worshipped in both Swahili and the Maasai language, the team members introduced themselves, and the elders of the church told us to send their greetings to our fellow Christians in the United States.  Reverend Wambua commented on the fact that the community of believers composes the church, not the building or facilities.  The village was surrounded by a fence fashioned from living thorn bushes designed to protect the community from lions, so Alan gave an encouraging message using an analogy between the fence's openings and the story of the wide and narrow gates in the Bible.  After the church service, John prayed for the continued success of the Maasai pastors' efforts to plant new churches, and the congregants shared Kenyan tea with the team.  As we prepared to say goodbye, the villagers gave us traditional necklaces made from beads, and we gave them soccer balls, sundresses for the girls, and even some fidget spinners (which fascinated them).

While driving to and from the isolated Maasai village, we spent hours gazing at the beautiful savannah, which looked like a scene from the Lion King.  We watched grazing zebras, ostriches, and gazelle, and at one point we were able to leave our van and get as close as possible to a herd of wild giraffe.  Majestic mountains surrounded us, and the colossal Mount Kilimanjaro dominated the horizon and provided a backdrop for our journey.

Spending our day with the Maasai was inspiring since we come from starkly different cultures and opposite sides of the globe, yet we still worship the same God and place our trust in the same Savior.  Pray for the Maasai's church planting efforts, as well as for their faith to be as deep as it is passionate.  All in all, ministering in the wilderness made for an incredible day filled with experiences that none of the team members will ever forget.

Thanks for the beautifully written blogs! We are praying for you: to minister the love of Jesus to those you meet, for your presence to be an encouragement to our brothers and sisters there, and for God to impact you through this trip. We will be praying for you corporately tonight at Impact prayer meeting. Blessings to you!!

I look forward to reading this blog each day...very inspiring!
I'm laughing at the fidget spinners...my annoyance is their fascination...I could learn from that.
Continued blessings.