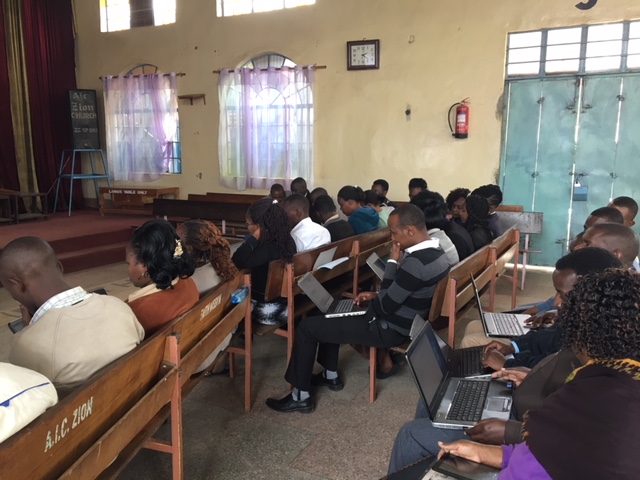 Our team has a wide range of personality types: we have extroverts and introverts, athletes and academics.  Though we are different, God channeled our talents into the niches that we are continuing to realize at AIC Zion.

The day began with Bill setting up dozens of donated laptops--which miraculously passed through airport customs without question--and coaxing each one into a functional state.  He used technologically illiterate team members like Cami, Laura Cabe, Ben, and Laura Wylie as assistants; together, they uploaded educational software and connected each laptop to the wireless network.  In the afternoon, Bill spent several hours demonstrating Google Earth, Microsoft Office, and other programs to the entirety of Zion's staff.

The students crave knowledge and cling to every word of our lessons.  Because of God's provision and protection of the laptops, Zion's students will be able to visualize their curriculum with YouTube videos and three-dimensional models--a drastic improvement from chalk images sketched onto makeshift blackboards.  Though Bill's technical expertise was manifest, he was quick to point the glory back to God.

As Bill worked his computer magic, Ron, Laura Wylie, and Cami continued to mentor teachers in additional large group discussions.  Reverend Wambua was especially pleased with Ron's impact on the high schoolers; he asked Ron to prepare several physics and chemistry lessons for tomorrow and specifically asked for "the science teacher" to return next year.

Matthew continued to coach the students in various games and realized that the younger students are not difficult to entertain.  He simply speedwalked in a straight line as a swarm of children followed closely behind him, then suddenly made sharp turns as the children crashed into each other, laughing as they continued their pursuit.  Wayne also joined in the fun; though he was undefeated in arm wrestling, his thumb wrestling performance was self-reportedly lackluster.

In between scheduled events and sessions, we enjoyed "freestyling" and visiting as many classes as possible.  Ben spent an hour teaching introductory calculus to a particularly intelligent eighth grader, who understood the concepts perfectly and solved high school level problems on the first attempt.  Laura Cabe watched fourth graders in their performing arts class, which included memory verses, songs, and poems with Biblical themes.  She later taught English to fifth graders, who are already learning concepts as complex as selecting adverbs that emphasize positive and negative sentence connotations.  Dee and Ben visited a fourth grade class that requested for Ben to teach them salutations in Spanish.  In return, the class and Dee taught Ben how to count to ten (moja, mbili, tatu...) in Swahili.  "Freestyling" proved that any AIC Zion student would immediately rise to the top of the class if he or she were to attend school in the United States.

At the end of a fruitful day in the school, Wayne taught Bible study for church members and encouraged the process of observing, interpreting, and applying Biblical passages.  The team members divided the Bible study into smaller discussion groups and offered feedback as our Kenyan friends tried the technique.  Wayne once again had the opportunity to instruct Reverend Wambua, his former seminary student.

Our evening concluded with a celebration of Matthew Lucas's birthday, complete with time spent together watching the World Cup match and a cake that we requested to be iced with "Happy Birthday Mzungu" (Happy Birthday, White Person).  The team is growing closer than ever as we watch God work through one another in mighty ways.

Excellent writing, Ben. Is somebody shooting lots of photos to accompany these written descriptions?

Across the last couple of blog posts, it sounds like the key word for this trip, flexibility. While schedules may be helpful, being will and able to change quickly, and still be effective, is vital.

Thanks for these posts. They are very important to keep us informed, and to sustain interest in these mission trips.

God bless the ministry of your hands (feet, minds, etc.).


Amazing job Bill, thank you for all your team work in Kenya.