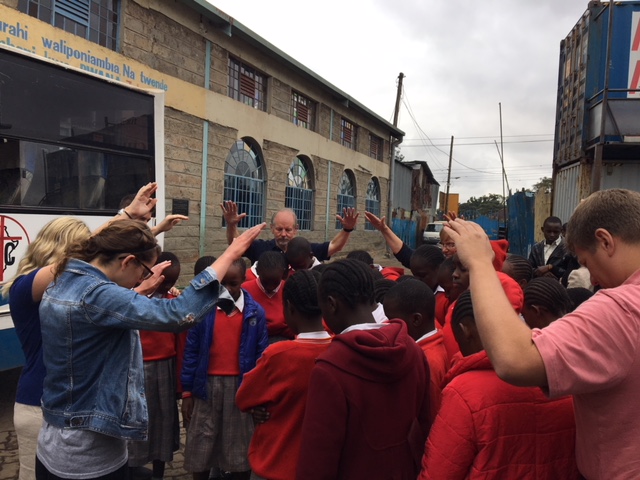 AIC Zion has a winning attitude.

At the beginning of our day, Laura Cabe prayed for the school's drama team before they climbed aboard the school bus for a competition.  Wayne led the team in loudly chanting "tutashinve" (we will win), just as his daughter and her teammates did before soccer matches in Kenya many years ago.

Dee and Ben later interviewed Reverend Wambua in order to fully understand his vision for Zion.  Wambua has a comprehensive two-year plan that includes increasing the school's enrollment from 680 to 1,000 students, purchasing land for a science lab, and digging a borehole to secure a reliable water supply.  His mindset, like the mentality of the drama team students, is geared toward victory through Christ.

A major feature of the afternoon was a question and answer panel with the entirety of Zion's high school.  The students asked a wide range of questions about American history, choosing careers, education in the United States, and numerous additional topics.  When a theological question was asked, it was immediately designated as a "Wayne question."

Most of the day was otherwise spent moving from classroom to classroom and teaching lessons in every subject imaginable.  Wayne gave Form 3, the equivalent of eleventh grade, a ninety-minute crash course on the redemptive story of the Bible.  From creation to restoration, Wayne emphasized the truth that every individual has a role in God's plan to redeem His creation.  The classroom was completely silent as the students absorbed every word uttered by Wayne.

Dee taught in a primary school classroom for a full forty minutes before she realized that the students were in their break time; they were too polite to direct her to dismiss the class!  As Ron taught chemistry, Matthew marveled at the manner in which the students grasped the lesson perfectly.  Ron, who taught science classes all day, has been slated to teach four science lessons in a row tomorrow--and he could not possibly be more thrilled.

As usual, Laura and Laura spent most of their time with first, second, and third grade.  The younger students at Zion are by far the most hyper; their energy, fueled primarily by rice, beans, and high-fives from Americans, is seemingly endless.  Matthew was described by Dee as having "mother eyes" as he sternly, yet lovingly, corrected students' mistakes during volleyball practice.  Bill used his phone to show images of galaxies, farms, and any other concept that the students wanted to discuss.  Cami, who has developed a devoted following of eighth grade girls, deviated from teaching math in order to build deeper relationships with her new friends.  She shared her testimony with the girls and mentored them on the process of following God through adversities.

Laura Wylie worked with two violinists from Form 3, who only had access to broken violins with missing strings.  Regardless of this setback, Laura taught the students how to read music, which will unlock their ability to learn any song in the church's hymn books.  After spending several hours with her students, Laura was the last of our team to end her day in the school.

Ben, who was assisting a handful of Form 2 (tenth grade) students with their math homework, set his near-sighted glasses on a desk as he examined a problem.  A student picked up the glasses, glanced momentarily through the lenses, let out a gasp, put them on, and exclaimed "I can see!"  The student could clearly discern the words on the far-away blackboard for the first time in her life; she had not realized that she had needed prescription glasses, which are neither affordable nor available in Mathare.

During his interview, Reverend Wambua was asked to describe the hardest part of his job.  He stated that the most difficult aspect of leading AIC Zion is knowing that his students have needs and nonetheless lacking the resources to fully meet them.  It shatters our hearts to know that the example of glasses is merely one of many such needs.

Once again, the evening concluded with a leadership seminar--this time, with the ministry directors of AIC Zion's church.  Both groups learned from one another as they discussed the qualities of a leader that is modeled after Jesus' example.  Pointing to the solitary lightbulb mounted on the ceiling of the otherwise dark classroom, Reverend Wambua ended the seminar by drawing a comparison between electricity and the power of knowledge.

Before departing Zion, the drama team returned brandishing a first place trophy; for the second year in a row, they have advanced to the national level!  More excited chants of "tutashinve" ensued as Zion's teachers took countless photos of the team, gushing with manifest pride at their students' accomplishment.

"Tutashinve"--we will win--is AIC Zion in a nutshell.  In spite of lacking violins, eyewear, and other resources that Americans take for granted, the students are motivated, intelligent, talented, and fiercely curious.  Likewise, Reverend Wambua and the teachers slowly, yet surely, continue to expand the capacity of Zion to educate, feed, clothe, and love the children of Mathare.  They are the embodiment of Philippians 4:13: "I can do all things through Christ who gives me strength."

Amazing stories! So proud of you and your church group and the Zion family. Sending my blessings!

Love this! What an awesome day!