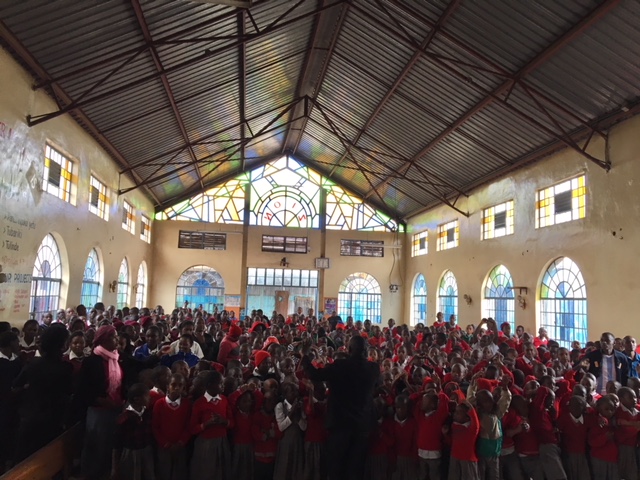 As we spent our final day with AIC Zion's students, we gave many hugs, took plenty of pictures, and generally enjoyed one last day at the school.

We participated in a goodbye ceremony that was packed with performances from the students, including songs, dances, dramas, a Kenya Scout presentation, and acrobatics showcased by two twin brothers from the high school.  Although the teachers had vaguely defined the ceremony as "short" before it began, we nevertheless enjoyed two and a half hours of witnessing Zion's talent.  The final dance number, led by Matthew and Ben, was the Cotton Eye Joe.  Today, the loudest sound in East Africa was created by hundreds of students dancing to American bluegrass music.

Wayne and Dee closed the ceremony by describing Zion in its infant days of serving only thirteen primary students.  From that seed, God has grown a school that will command the attention of Kenya--and possibly the world--as it begins to send children from the Mathare slum to Kenya's top universities.  Zion will have its first graduating class in December of 2019, and we cannot wait to see what God does with a decade of hard work and prayer.

We spent the afternoon saying our goodbyes and pouring into our students as much as possible.  Cami told riddles that stumped the students and her fellow team members.  Laura Cabe passed over an hour dancing to Kenyan choir music with a "baby class" student.  Ben used a Lego Mindstorm robot to instruct two aspiring engineering students in beginner-level programming.  Laura Wylie gave her final violin lesson.  Through the afternoon, all of us already began to feel homesick--not for the United States, but for Zion.  Although we will see a handful of our students tomorrow at church, we will not have the opportunity to pass hour after hour doing our favorite activities and sharing our lives with them.

Matthew, Bill, Wayne, Dee, Laura Wylie, Cami, and a few dozen students boarded the school's bus to advertise AIC Zion's church services in the slum.  They made a handful of stops as the bus played Swahili worship music in order to attract a crowd.  At each stop, Wayne and Dee reenacted the story of David and Goliath, with Wayne filling the role of Goliath and Dee playing the part of David.  While the mission successfully spread the word of AIC Zion's programs, the team members each reported powerful conversations with the students on the bus.  Ron, Laura Cabe, and Ben stayed at Zion with the remaining children.  The three team members learned traditional Kenyan dances and played footage of the recent SpaceX rocket launches, explaining the technology behind the unmanned spaceships to a cluster of fascinated students.  On this trip, we have built deeper academic and spiritual relationships with our students than ever before.

As always, we absorbed the sights, smells, and sounds of Nairobi's traffic on the way to our hotel.  Kenyan roads may be treacherous at times, but they provide plenty of opportunities to watch people go about their daily business.  While our van navigated the scramble of cars, bikes, pedestrians, buses, and rickshaws, we watched in astonishment as a young Kenyan man successfully loaded a sofa bed onto the back of a motorcycle.  Such a feat is comparable to the radical idea of educating several hundred children from Mathare and empowering them to maximize their futures.  With faith, resourcefulness, and effort, all may be done through Christ.  In the eyes of God, speeding through Nairobi traffic on a motorcycle laden with a sofa bed, lifting hundreds of children out of poverty, and every other feat is equally possible.

Ben & Team
I congratulate each of you I allowing God to use you in this special way.
Ben thank you for the Blogs. You painted a picture that allowe those reading your blogs could understand and feel. May God bless each of you
With the great memories you will have.