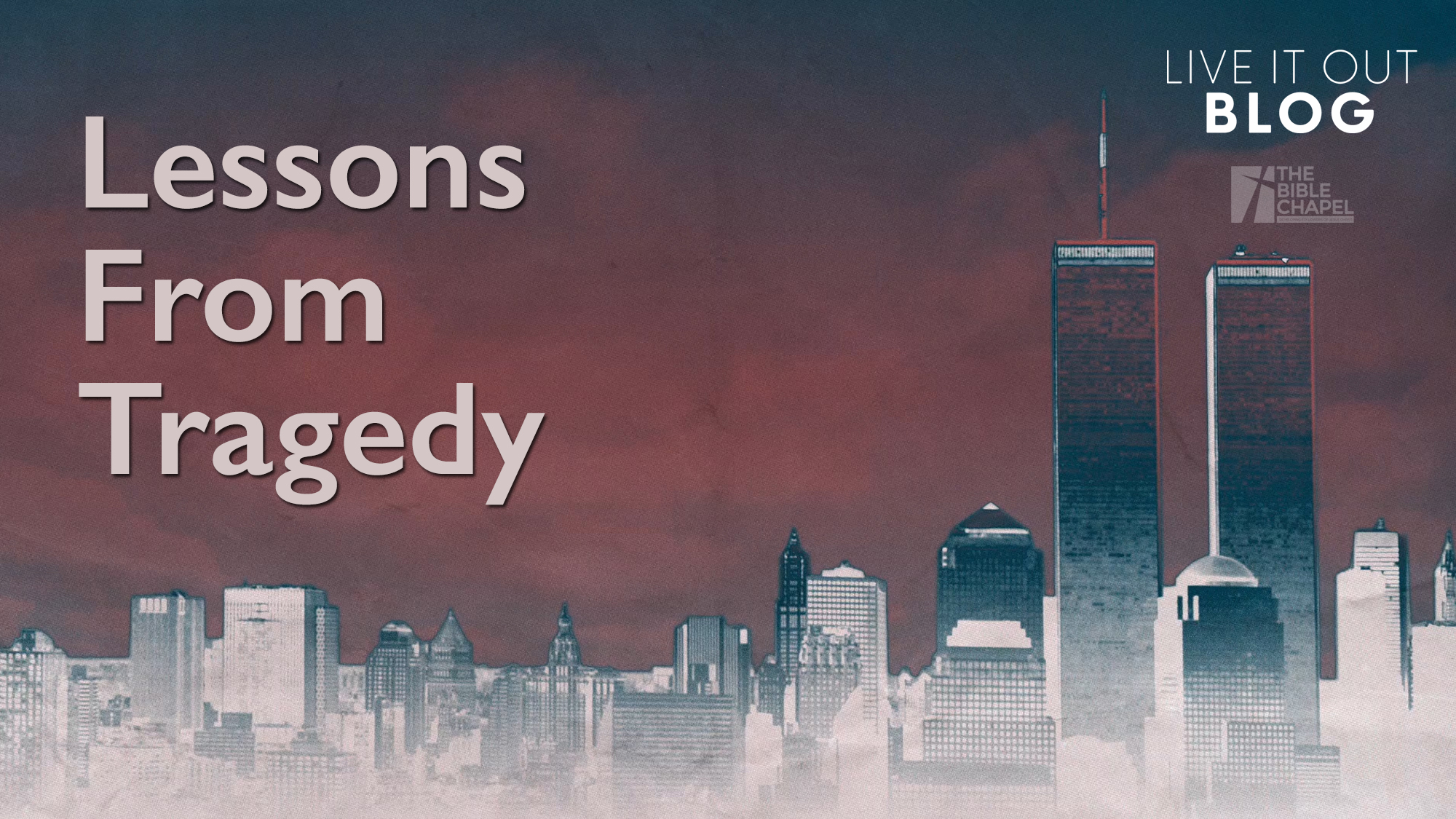 In the fall of 2001, I set foot on the campus of Grove City College. Like any other college freshman, I was excited and nervous – ready for newfound freedom and to meet new friends, many of whom I remain close with today. I knew God would use this time to mold me for my future. Because I played football for Grove City, I arrived on campus early in August and quickly became close friends with some other freshmen on the team. We ended up sharing a dormitory called Ketler Hall, and my room became the main hang-out thanks to the TV… Good for making friends, bad for getting any studying done.

On September 11, 2001, I woke up very nervous as I was scheduled to take my very first college exam in calculus. I studied all night knowing that this first test was a big moment to the start of my college academics. I remember walking into the room to find my professor, Dr. McIntyre, dressed in an all-brown suit and not acting his normal, joyful self. In the first two weeks of class, Dr. McIntyre smiled constantly and always joked around. It may sound crazy, but he made calculus fun. But when I walked in at 8:55 in the morning he had a solemn look on his face. Before he prayed at nine o’clock to start our exam, he said that an accident occurred in New York City in which a large plane crashed into the World Trade Center, so he wanted to pray for all the victims as well as for our exam. As a young college student who didn’t even know what the World Trade Center was, I didn’t think much of it and got focused on my exam.

As I left that test around 10:15, the hallways of the building were buzzing with chaos. People were talking about more planes hitting buildings, terrorists in the United States and other chatter. I was told classes were cancelled for the rest of the day, so I sprinted back to Ketler Hall to see what was going on. As I ran into my dorm room, there were nearly 30 freshmen circling our small 19” tube TV.  Right then I saw the images of the World Trade Center towers in flames and for the rest of the day witnessed the unfolding of 9/11 with my college buddies. It was a day that forever changed our country and my perspective on life.

As a college freshman just two weeks into my classes, there are a few lessons that I learned that fateful day that still stick close to me today:

Hundreds of men, women, and children boarded planes or walked into work that day assuming they had many more days ahead of them. In all, 2,977 people were killed in New York City, Washington, DC and Shanksville, PA. Seventeen years later, their families and friends still mourn their loss, and we need to keep them in our prayers this week. As a college freshman, I thought I was just beginning my life of freedom that was going to last me a good 60+ years. September 11 humbled that expectation. It reminded me that life is short in light of eternity – something I strive to remember every day.

As the Word says in James 4:14, “Yet you do not know what tomorrow will bring. What is your life? For you are a mist that appears for a little time and then vanishes.”

As a college freshman, it was so hard to fathom how any human being could take so much time and effort to plan and execute the terrorist attacks we witnessed that morning. I was educated on historical events such as the Holocaust in high school, but I never thought it would happen in America. September 11 taught me early that the world is absolutely broken from sin. As Jeremiah puts it, humanity is desperately sick.

“The heart is deceitful above all things, and desperately sick; who can understand it?” – Jeremiah 17:9

Sinful humanity without Jesus can perform some of the most hateful and disgusting acts that we could ever imagine.

Throughout my college years, was I self-focused at times? Absolutely. Actually, you could probably say most of the time. But something 9/11 instilled in me early on as a young believer is that because life is short and the world is broken, my life can’t be all about me. I don’t want to waste my life focused on myself when God has something bigger. I wanted to make a difference in this world for Jesus. Those convictions that stirred up on September 11, 2001, led me to start a Bible study for our football team, go on a mission trip to Guatemala and then serve in Biloxi, MI after Hurricane Katrina, all during my tenure at Grove City.

The only person who can and has overcome the evil of this world is Jesus Christ. He defeated sin on the cross, and he is the hope we have today, tomorrow and forevermore. He alone gives us the peace we need in this fallen world. As Jesus stated to his disciples:

“I have told you these things, so that in me you may have peace. In this world you will have trouble. But take heart! I have overcome the world.” – John 16:33

Tragic historical moments like 9/11 don’t happen every day, every year, or even every decade. But it doesn’t take much to recognize that until Christ returns to make all things new, humanity is broken, lost in sin, and desperately in need of Jesus. Just turn on the news tonight, read the local paper, open up Facebook.

I encourage you this week to live in a manner knowing that life is short, the world is broken, and it’s not about you – it’s about Jesus.

How can you make a difference for Jesus today?

Very well said. It is amazing how such tragedies shake us out of our selfish narrow view. The response is usually either hiding our head in the sand or becoming involved for Christ. Glad you made the later choice, Dave.